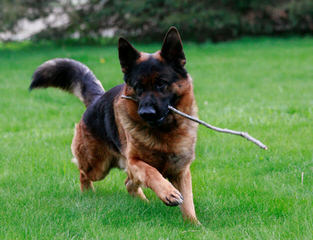 DIXIELAND GERMAN SHEPHERDS is a cooperative of breeders from Georgia, Florida, Alabama, Tennessee, and South Carolina. We are breeders of some of the finest bloodlines in the history of AKC German Shepherds, such as RIN TIN TIN, SNOWCLOUD, and ZIDANE bloodlines. We offer German Shepherds from champion show lines, working lines, and a combination of the two. We produce solid white; solid black; silver; blue; liver; isabella; black and silver; black and tan; black and red German Shepherds. We have stock coats, plush coats, and long coats in most colors. Regardless of their coat colors, all of our dogs and puppies are very loving and make excellent family companions, therapy dogs, search and rescue dogs, and personal protection dogs. All of our breeders are licensed and approved by the American Kennel Club.
Our German Shepherds descend from prestigious Rin Tin Tin, Zidane, Regalwise, Snowcloud, Tumbledown’s, Wildsteiger, Auschwitz, Eichental, Kirschental, Kleistweg, and Kreuzfahrer bloodlines, to name a few. Their pedigrees trace back to two of of the original television stars, Rin Tin Tin II and IV. There are several other stage, television, and movie stars in their pedigrees, including one named Harvey-Bindlestiff-Offner who toured with Roy Rogers, Trigger, and Bullet. The Snowcloud line combines two major lines. One is the White Shadow line, which is often seen in the movies and TV. White Shadow Crider starred in Walt Disneys Corky and White Shadow. The Snowcloud line carries more Obedience Titles given by the American Kennel Club than any other White Line of Shepherd. In the Snowcloud line, Alice’s Chinook Von

Get Listed on This Site:

Dog Breeders and Puppies in: